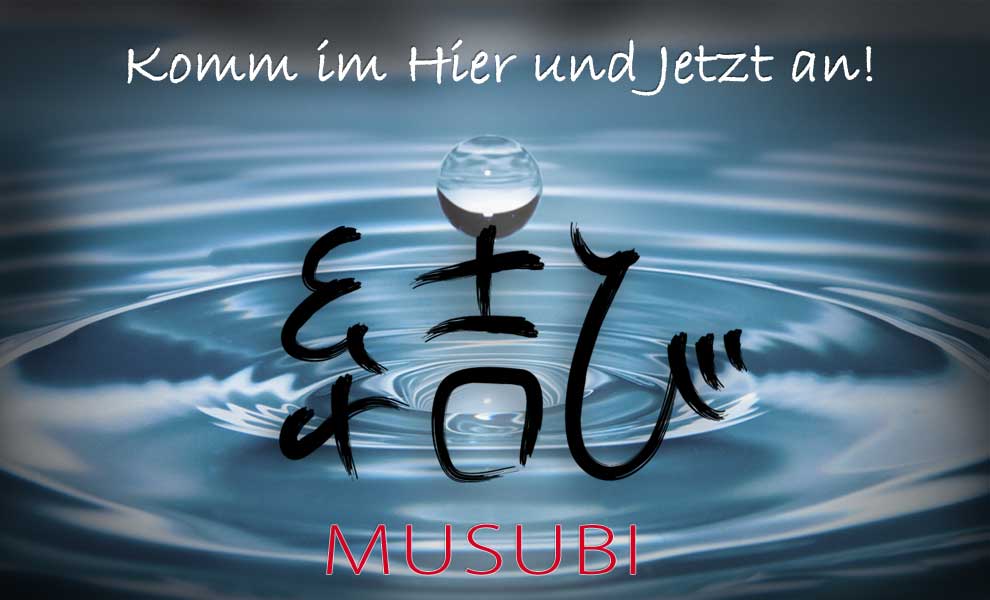 KI-NO-MUSUBI: BODY AND MIND IN THE MOMENT

There are several ways to approach the present, the moment of our existence, the "MUSUBI WAY" is one of them. At the beginning, there is just to realize awareness. For this we start with breathing exercises, the Kokyo Ryoku. Level 1 is to become aware of your self by breathing. Our mind follows the flow of inhaling and exhaling in various ways to get to know the body, to "free" our mind and to center ourselves, to occupy space. In Level 2 Tai-No-Sabaki, we proceed the whole thing in motion. In level 3, levels 1 and 2 have sunk down, are in a way automated. Now we should be careful, not to fall into illusions. Ki-No-Musubi as a whole means to "integrate" into the natural process of the present, to tie in, ultimately guided in one direction without any rough edges. This is not something esoteric, it's very natural, we all have done this many times, altough we are not able to remember. "If you intuitively do the right thing at the right time, everthing falls into smoothness, without being influenced by our ego. Ki-No-Musubi means to practice just that, by freeing our consciousness for perception and acting "subconsciously" in sync with the body and mind in the moment.

The term "Musubi" can also be explained more simple: MUSU (originally Umusu) means "naturally created" and BI "spirit, mental work" MUSUBI arises to "connect, merge". It is up to our self, that our spirit can arrive in the present moment, as a link to space and time. Natural consciousness is not "distorted" by our thinking. A "pure" mind in the here and now, is clear, is in the mode of attention and presence. We "don't think" (of course we do), we do not remember, we do not plan, we see no processes, we are just relaxed and present.

Aikido on a higher level needs this basic philosophy to work properly. It's not only about knowing and using a huge amount of techniques, it's their application in a harmonic way in the flow. There is no real "against", the "aim" is to connect to the truth, as a part of it. That is why only need a little physical strength, if you are centered, mobile and in the right place at the right time.

O'Sensei has resorted to the three geometric basic forms of triangle, circle and square in order to familiarize his students with the systematics behind Musubi.

2. Circle (Marui), Taru Musubi symbolizes the acidotypic circular movements. They are the second level in an attack and the key to the fluid, centered continuation, the unification with the "attack" movement. It stands for unity and Agatsu, but also for the reuse of energy, feeling, courage, perfection, fluid, life, presence, moon, water and the circulatory system.

3. Square (Shikaku), Tamatsume Musubi, means to be stable, centered and grounded. It symbolizes the control of movement, but also explosive Kokyo and strong holding techniques, weight reduction concentration on the point (focus). In addition: will, beauty, strength, fate, past, mirror, sun, rice and digestive system.

The variation and combination of all three creates the typical flowing, circular and spiral aikido movements.